You will find on this page some rare and very beautiful New Caledonian Conidae (GALLERY and LISTING) to discover.

Surrounded by an immense lagoon, the second largest on the planet they say, New Caledonia remains a true paradise for marine species, includingcones.
Many species are coasting along North to South, East to West.
But certain particularisms are observable according to areas
Thus, a very restricted habitat is present on the West coast, in particular Bourail, more precisely the beach of Poe,
on a few hundred meters only, where two endemic cones, the famous:
- Marmoreus “Bastards ” (“Albinistiques”, whose the drawings of the shell become quasi non-existent).
- Marmoreus “Pink ” (“Caledonicus”, “Suffusus”, whose drawings completely disappeared),
run there happy days good with the shelter within an Integral Marine Reserve.
Two other Cones of the same Family, endemic also, but completely divergent by their drawings, the superb:
- Marmoreus "Blacks " (“Nigrescens”, “Crosseanus”, whose graphics gather to lead to entirely black shells),
that one finds only in the South of the Large Earth, in the Island of the Pines, more precisely at Bay of Oupi.
- Marmoreus “Reds ” ("Special", whose drawings remain normal by their graphisms,
but transfer with the complete translucent red) which one can find also only in this island, more precisely at the South-East of the Nokanhui Island, in a very restricted perimeter of a few tens of meters only.
Other rare cones are present outside the lagoon, in depth, such as the famous " Merletis ",
" pertusus ",
and or other " Lambertis ",
but more still recently discovered, great depths conus ("Brunei", "Gondwanensis", "Luciae", "Plinthis", etc...), just as beautiful !. 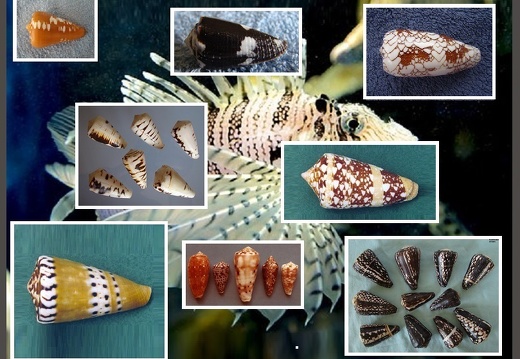 23 photos
Powered by Piwigo | autor | Biography | Rules | Thanks to